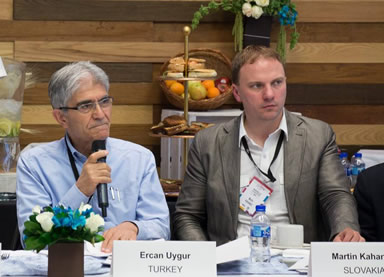 The Vice Rector of Final International University, Prof. Dr. Ercan Uygur as part of the Turkish Economic Association Presidency and IEU Advisory Board, participated in the meeting of the General Assembly and reported his views. Dr. Uygur emphasized that the congress was realized with the participation of countries across of the world and made suggestions to the policy practitioners directing the world economy. During his speech, Uygur stressed that the world economy was not yet on a full growth path, but that some countries had introduced foreign trade restrictions that limited that growth, suggesting that this was not appropriate for world economic stability. Meeting with Mexico's Economy Minister Ildefonso Guajardo as well, Dr. Uygur exchanged views on the problems of the Turkish and Mexican economies, the restrictions of labor movements and trade, and the upcoming G-20 meeting’s economic agenda.